The senior is the favorite in four events at the Class 1A track and field state meet and has the best marks in two other races. 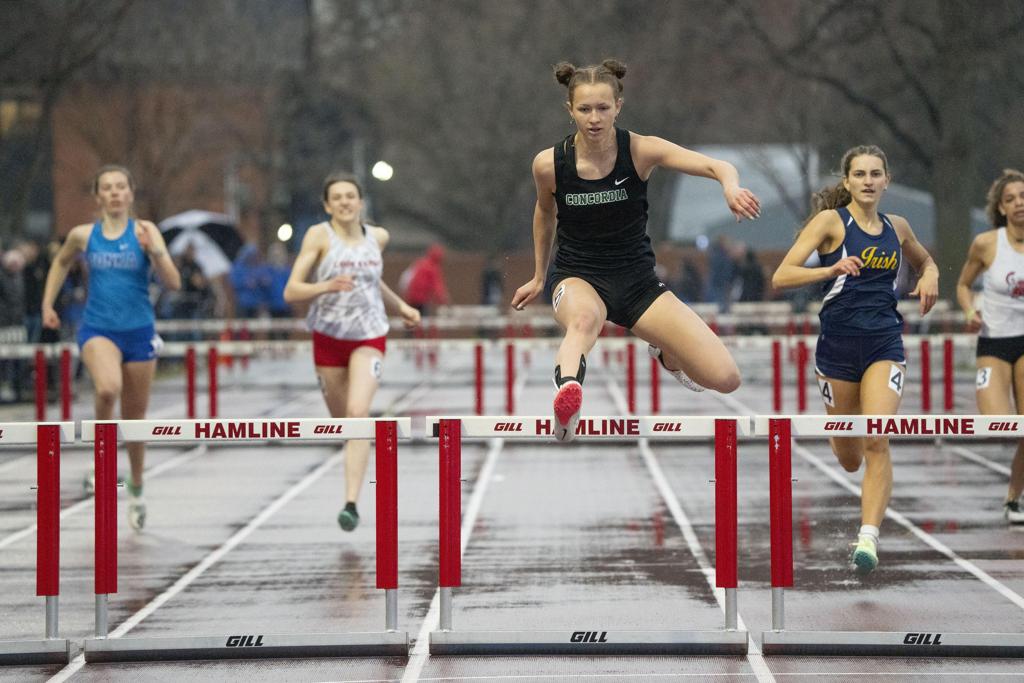 Keeping the versatile Shaina Zinter’s track and field accomplishments straight is tough for even Marc Paul, her coach at Concordia Academy of Roseville.

Paul struggled to rattle off her bona fides from memory during a team banquet earlier in the week. Easy to do considering Zinter’s mastery of multiple events. An aspiring college heptathlete who has signed with Wisconsin, Zinter is in rare company at this week’s Minnesota State High School League track and field state meet running Thursday through Saturday at St. Michael-Albertville.

She holds the top seeded times in both the Class 1A 100- and 300-meter hurdles, events she won a year ago. Her marks also make her the favorite in the 200 dash and long jump. Athletes can compete in only four events, forcing Zinter to pass on running the 100 and 400 dashes — races where she recorded the fastest times in Class 1A this spring.

“She is a hurdler at heart, but she could definitely win those other sprints,” Paul said.

In Class 3A, a pair of decorated seniors are also vying for glory in four events: Edina’s Maddie Dahlien and Rosemount’s Ava Cinnamo. A year ago, Dahlien swept the 100, 200 and 400. This season, she’s also the top seed in the long jump — one spot ahead of Cinnamo.

Cinnamo swept the 100 and 300 hurdle events among the big schools last season and also reached the podium in triple jump and as part of the Irish’s 4x400 relay. Earlier this spring, Cinnamo set the state record with a triple jump of 41 feet, 6 inches.

Two boys’ state records were set this season, though only one is in danger of falling at the state meet.

Mounds View’s 4x800 relay ran to a state-record time of 7 minutes, 39.91 seconds at the Suburban East Conference championships in late May, The foursome of Maximus Gregory, Victor Lelinga, Elliott McArthur and William Skelly joined forces for the first time all season, and the results were remarkable. They won’t run together again, however, until Nike Outdoor Nationals taking place June 16-19 in Eugene, Ore.

All four will compete at the state meet in various individual events and other relays. Skelly is the defending big-school champion in the 800.

Jarod White of Pine Island, who set a pole vault record by clearing 16 feet, 2 inches, is the overwhelming favorite to repeat as the Class 1A state champion.

History will be made at St. Michael-Albertville with the first running of a three-class state meet.

Track and field added a third class beginning with the 2021-22 school year, the first such expansion in almost 50 years.

Aaron Berndt, the sport’s coaches association president and the Wayzata boys’ track and field coach, said his group fought for the change because about 8% of competitors in each state qualify for the state meet. That number was just 3.4% in Minnesota.

About 32,000 athletes compete in track and field in Minnesota, which was the only state in the top 10 for participation to offer fewer than three classes.

To celebrate the 50th anniversary of the girls’ track and field state meet, trailblazing athletes and coaches from the 1970s will be recognized for their efforts to chart a course for the ensuing generations.

On Saturday, those athletes and coaches are welcomed to stop by the Minnesota Track and Field Coaches’ Association hospitality tent after noon. The honorees will be presented to the crowd during the Class 2A meet and again before the 3A meet.

Honorees will receive a brightly colored T-shirt and a wristband that will provide free admission to a VIP section for all three days of the state meet. Wristbands and T-shirts will be available at the coaches registration tent at the south end of the stadium.