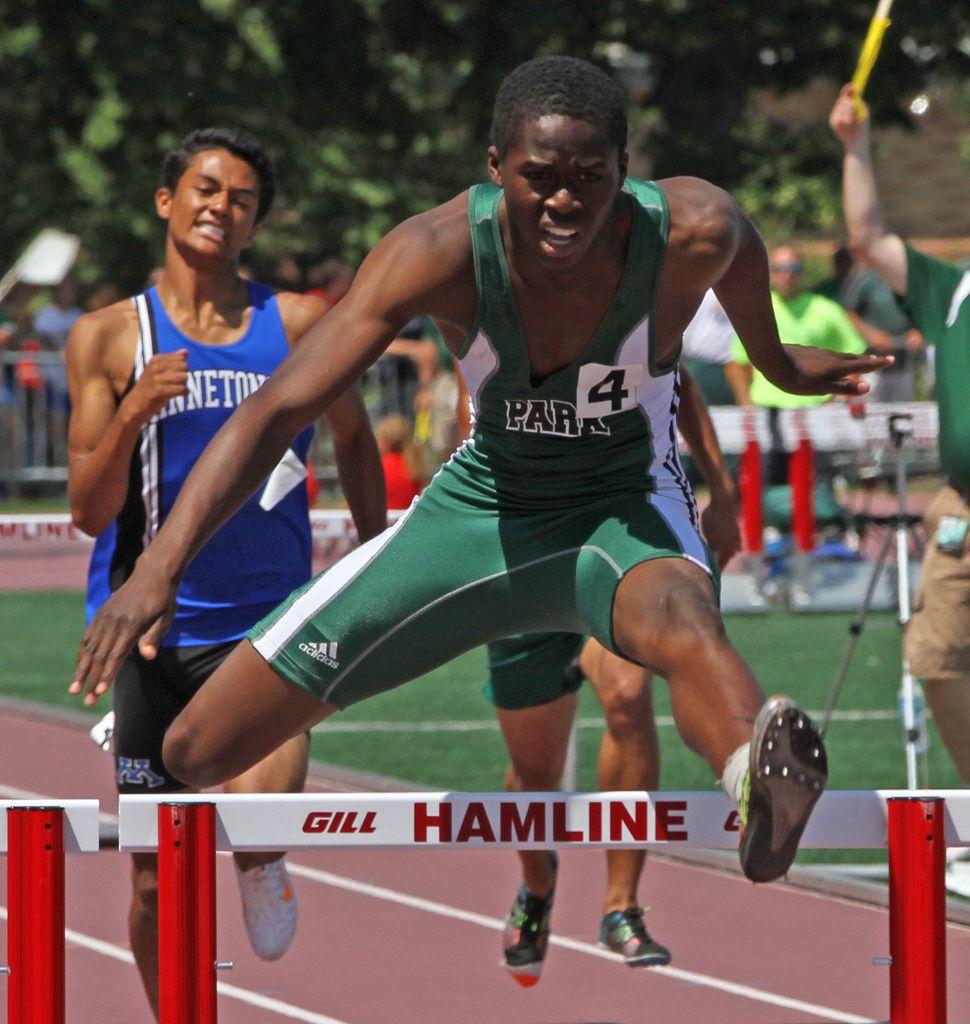 Alowonle defended his 110- and 300-meter hurdles titles and helped the Wolfpack's winning 4x100 relay. Add the triple jump crown he won Friday, and Alowonle's weekend measures up with the best ever.

Young fans, however, were surprised to see Alowonle measures only 5-11.

He will compete for North Carolina next year after winning seven state titles and resetting the all-time record in the 300 hurdles (36.38 seconds) earlier this spring. The previous mark, set by Dan Banister of Minneapolis North, stood for 25 years.

Minnetonka track and field coach and former hurdler Chris Cohen watched Banister at the 1987 state meet and went back in time Saturday marveling at Alowonle.

"It was just Banister and everyone else out there and it was the same thing with R.J.," Cohen said. "R.J. made one of the deepest fields ever look average."

Until recently, Farmington junior Nadia Lorencz resigned herself to second place in the 100 hurdles.

Winning the title would mean upsetting two-time champion Jessica January of Richfield, a task Lorencz did not consider possible.

"I used to be a very negative person and say things like, 'I know I'm going to come in second, so why get my hopes up?'" Lorencz said.

"I said, 'Just get in front of her for the first three hurdles because no one has ever done that and see what happens,'" Endersbe said. "She came back the next day and said, 'You know what, Coach, taking second is not OK. I'm going to beat her.'"

Hauger will have another

Shakopee junior Maria Hauger made two plans for Saturday: secure a distance running triple crown by winning the 1,600, then watch I'll Have Another win horse racing's Triple Crown at the Belmont Stakes.

"I was thinking, 'I'm going to be just like that horse,'" Hauger said.

She was better. The injured colt retired earlier this week while Hauger ran strong, overtaking Prior Lake's Taylor Scholl in the final 50 meters to win with a time of 4 minutes, 55.88 seconds.

Hopkins junior Taylor Anderson received major incentive for success. Win the 100 and 200, her mother said, and she would get a car.

Anderson won the 100 in 11.71 seconds to break Heather VanNorman's all-time state mark set in 1986. She later anchored the Royals' 4x100 relay team, which posted an all-time standard of 47.73 seconds.

Anderson took second to Alexandria eighth-grader Wensia Johnson in the 200. No matter. Two state records were enough to earn Anderson a car.