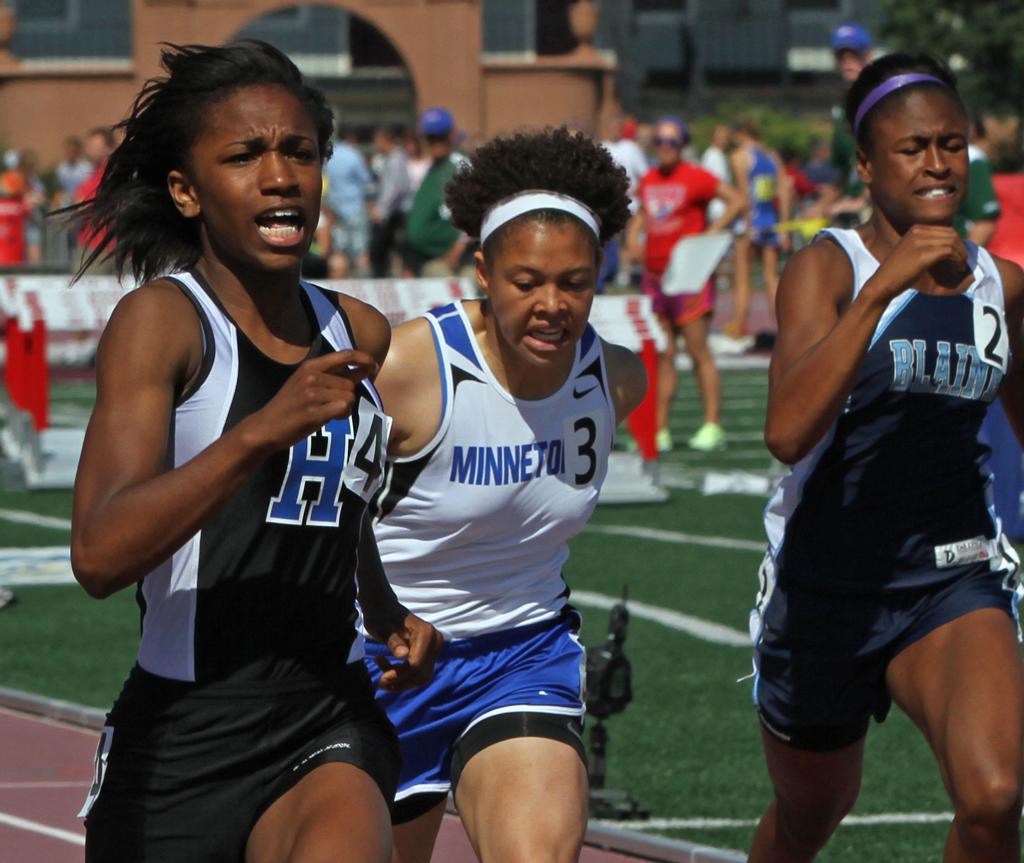 Taylor Anderson of Hopkins won the girls’ Class 2A meet 100-meter dash in a record 11.71 seconds. Her competition, Alexandria’s Wensia Johnson, finished only .12 behind. Anderson, a senior, signed with Connecticut. Johnson, only a freshman, figures to push Anderson once again. The duo, who work out together with the Track Minnesota Elite AAU team, went 1-2 in the 200, with Johnson edging out Anderson.

St. Francis senior thrower Maggie Ewen set a record discus throw distance of 172 feet, 7 inches — the first Minnesota high school female to surpass 170 feet. The next milestone might not be far off. She threw more than 180 feet at the state meet, but missed staying in the circle by mere inches and fouled. Ewen, who signed with Arizona State, boasts three consecutive state titles in discus throw and back-to-back crowns in the shot put. She recorded a shot put of 54 feet, 1 inch in March at the New Balance Indoor Nationals. The state record is 52 feet, 4¾ inches (Lakeville’s Liz Podominick in 2003).

Shakopee senior Maria Hauger and Blake junior Clare Flanagan became the 11th and 12th girls to win high school distance running’s “triple crown” last season. They won cross-country state titles in the fall and the 1,600- and 3,200-meter track and field state titles in the spring. They are on pace to do it again. Hauger, who signed with Virginia, became the first female to win four consecutive Class 2A cross-country titles. Flanagan defended her 1A title in the fall.

Three seniors — Lee Bares (Lakeville South), Grant Krieger (Blake) and Mitchell Valli (Buffalo) — are poised to smash the state pole vault mark. Kreiger and Valli already have soared above the record mark of 15 feet, 8 inches, but not during the high school season. Valli cleared 15-9 last June at a USA Track and Field Junior Olympics meet. Krieger, who signed with Clemson, went 16-1¼ in March at the New Balance Indoor Nationals. Bares vaulted a personal best 15-6 at the state meet last year and won the Class 2A title. Krieger took the 1A crown.

5 LOVAS ON THE MOVE

Nick Lovas, architect of the dominant Hopkins girls’ track and field program, changed jobs but can keep his Royals’ apparel. Lovas, who won Class 2A titles with the girls in 2010 and 2011, took the boys’ job at the school. His expectations have not changed. “I’m very excited about the boys’ team’s outlook,” he said. “We’ll compete with the best teams this spring.”