Middle-school twins Jada and Jia Lewis have sped onto the Edison and state track scenes. 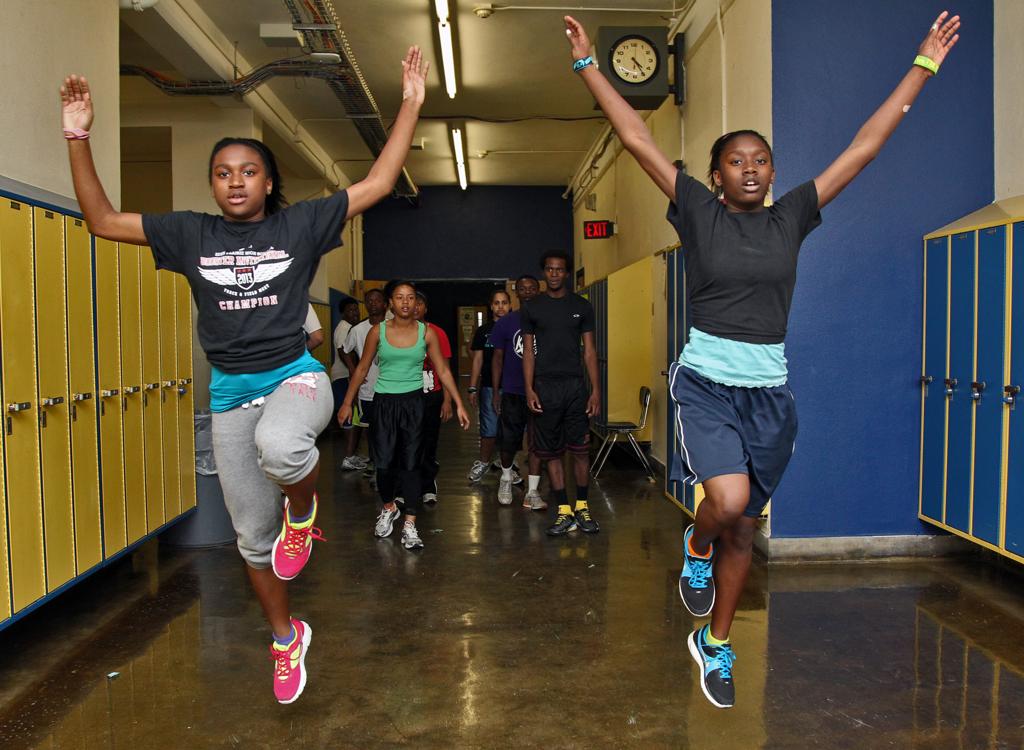 Jia Lewis, left, and Jada Lewis have burst upon the track scene this spring. They attend Ascension Catholic School but compete for Minneapolis Edison High School.

The practice venue that Jia and Jada Lewis have been using for the 2013 track and field season isn’t quite what the middle school-aged twins expected when they joined the Minneapolis Edison team two months ago. But, for two girls who live to run, training in the upper-level hallways at Edison is better than not training at all.

“It’s been fun,” said Jada Lewis, the eldest — by 13 minutes — of fraternal twin sisters who have shown the potential to rewrite the Minnesota high school record books. “But I’ve never worked so hard in my life.”

The Lewis twins burst upon the local high school scene when they swept the top two spots in the 60-meter dash at the University of Minnesota High School Indoor Classic in late March. Jia won in eight seconds flat. Jada was right on her heels, finishing in 8.05. Witnesses were flabbergasted.

“People didn’t know who we were,” Jia said. “But a lot people were coming us and congratulating us.”

This was nothing new to Edison co-head coach Kimberly Davis.

A heptathlete at Carleton College about a decade ago, Davis still participates in open track and field meets to stay sharp. She normally doesn’t run sprints, but in a meet two years ago, Davis was recruited to fill out a sparse 100-meter dash field.

“Jia and Jada were in it and they blew right by me,” Davis said. “I was thinking ‘What are 11-year-old girls doing beating me?’ ’’

Their parents have strong track and field backgrounds. Mother Dionna Richardson was a track star in college and father Herm Lewis coaches track in Chicago.

As 5- and 6-year-olds on the sidewalks of Minneapolis, they would routinely rout local kids in foot races. While they were developing neighborhood cred, older sister Desiree Richardson was finding success as a thrower, first at Minneapolis’ Eagles Wings Track Club and then at Roosevelt High School.

It was through Desiree that Jia and Jada first came to the attention of Ernest North, the son of Eagles Wings founder Joe Sutton and a co-head coach at Edison with Davis. Blown away by their natural speed, North knew that Jia and Jada could go a long way with a little guidance.

“Their talents are innate,” North said. “Their ceiling is as high as they want to put it. Now it’s a matter of nuturing that talent correctly and bringing them along step by step.”

Knowing their competitive nature and feeling they could benefit from racing against older competition, North approached the girls, who attend Ascension Catholic School in Minneapolis, and asked if they were interested in running for a high school team.

The girls, who already trusted North through Desiree and knew that he would be watching over them at Edison, jumped at the chance.

“If I want to reach my goals,” Jia said, “I realized that I have to go against more than just kids my age.”

Joining the team together provided an added measure of security. Knowing each other as only twins can, they cheer and encourage each other endlessly, often taking the other’s losses personally.

“I’m her biggest fan,” said Jada, who specializes in the 200- and 400-meter dashes. “My sister helps me be a better runner. If she loses, it gives me motivation to work harder.”

That attitude has carried over to the Edison team. Davis said the most pleasant surprise about coaching the young Lewis sisters is the leadership they bring to the team.

“I know they’re young, but they have a lot of track experience and they’re always willing to work hard,” Davis said. “We’re trying to rebuild this program from the ground up and they’re a good place to start.”