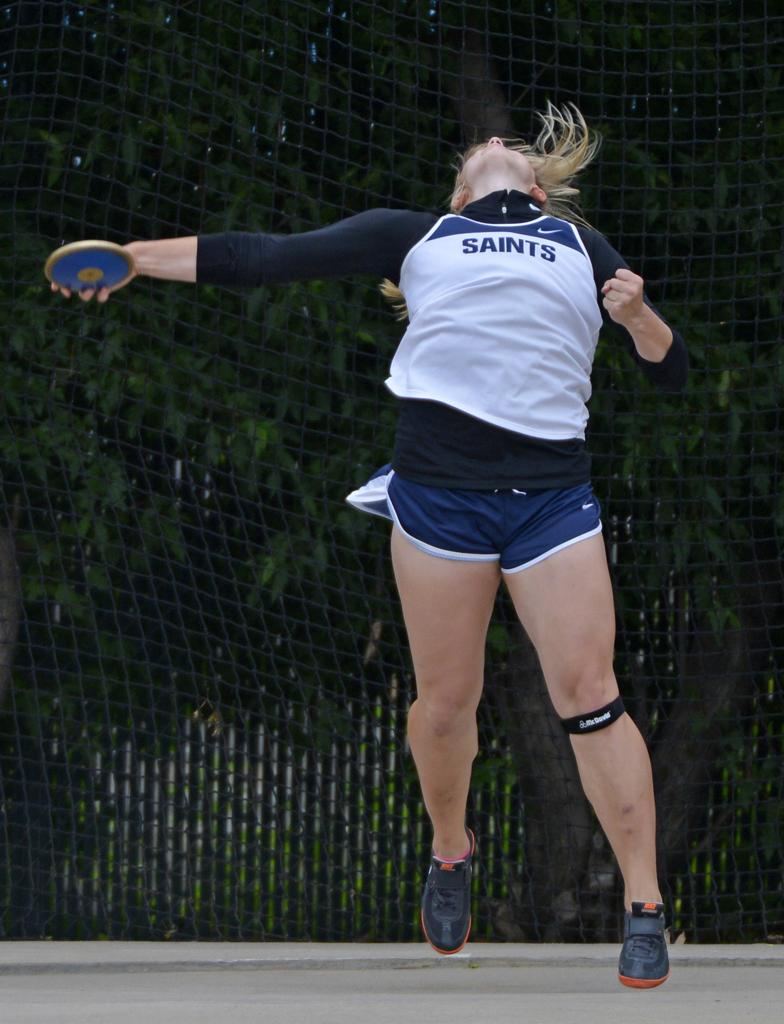 St. Francis discus thrower Maggie Ewen (shown here at the 2012 state track meet) broke the Minnesota state record in that event with a throw of 175 feet, 9 inches at the Class 3A, Section 5 True Team meet at White Bear Lake on Tuesday.

• St. Francis senior discus thrower Maggie Ewen and Lakeville South senior pole vaulter Lee Bares broke Minnesota state records in those events at their respective True Team section meets Tuesday. Ewen, considered among the top high school throwers in the nation, topped her own discus record with a throw of 175 feet, 9 inches at the Class 3A, Section 5 meet at White Bear Lake. Ewen’s previous record was 171-9, set at the 2012 state meet. At the 3A, Section 1 meet at Lakeville North, Bares cleared 15-9 inches, topping the previous record of 15-8 held by Macauley Spandl of Moorhead.

• LAKEVILLE NORTH 21, BLOOMINGTON KENNEDY 12: The Panthers scored 16 first-half goals to remain undefeated (5-0) in the South Suburban. Lakeville North has gotten at least one goal this season from every runner on the roster.

• NELSON INVITATIONAL: Wayzata, No. 2 in the MGA state rankings, edged No. 1-ranked Minnetonka by a single stroke, 289-290, to win the 16-team tournament at The Ridges at Sand Creek. Minnetonka senior Tommy Brandabur was the medalist with a 4-under 68.

• BUNKER HILLS INVITATIONAL: Maple Grove and Rogers shot identical scores of 301 to share the team title at the 31-team tournament. Blaine’s Dakota Krech was the medalist, shooting a 3-under-par 69 and helping the Bengals to third place with a score of 302.

• PRIOR LAKE INVITATIONAL: Lakeville North, No. 10 in the MGA rankings, shot a 333, edging No. 4 Minnetonka and No. 6 Eden Prairie for the team title. Lakeville North junior Christi Vetter was the medalist with a 3-under-par 69.