The Wake Forest-bound senior’s first long jump of the season missed the state record by ¼ of an inch. With warmer weather looming, she’s poised to make a serious run at it. 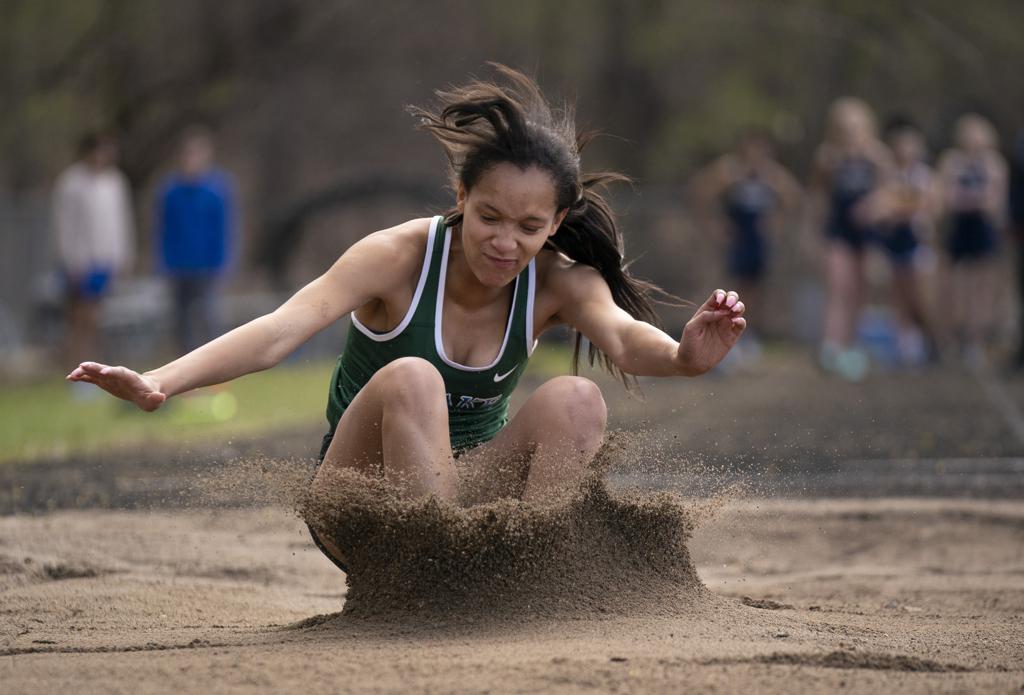 Robbie Grace landed on her third and final jump of a meet on May 2 at The Blake School in Hopkins. Photo: JEFF WHEELER • jeff.wheeler@startribune.com

Her leap of 20 feet, 1 inch was one-quarter inch short of the mark set by Anna Keefer of St. Michael-Albertville in 2017. It was the only time Keefer, who broke the former record by over 3 inches, surpassed 20 feet in high school.

Two years later Grace, who the Class 1A long jump in 2018, has set that mark as a goal for the season. As the weather warms up, the Wake Forest-bound senior looks to put herself one spot above her sophomore year “idol.”

Keefer, who earned second-team All-America honors in the long jump as a freshman last season at the University of North Carolina at Chapel Hill, said if Grace is “as driven as I was at that time, then she deserves it.”

There’s plenty of evidence of that drive. Like Keefer, Grace gave up other sports to focus solely on jumping and running. Grace played volleyball and was a captain of the basketball team last year. With more time for training, Grace started focusing on working out more in the weight room. She continued to participate in Track Minnesota, an offseason club, and national meets around the country to prepare for a final year of high school track and field.

To finetune her form, Grace worked with Keefer’s mother, Tiffini Schuebel-Keefer, who also worked at Track Minnesota, in small group sessions after last year’s track season was over.

Schuebel-Keefer, who coached her daughter and is currently an assistant coach at St. Michael-Albertville, said she considers herself good at helping athletes with great potential who ‘just need a little bit of polishing, or help, or ideas.”

With Grace, she said, “as a coach working with her, she really didn’t have a drive like, ‘I really want to get good at long jump.’ And then now, I feel like I can see she’s really put some heart in, and now I can see the difference in her jumps.”

Grace was mostly focused on running when she came to Blake her freshman year after competing for Minneapolis Southwest as an eighth-grader. She had run the 400 meters primarily but Blake jump coach Scott Stadem saw her potential in the long jump.

“I saw her workout and I said, ‘OK she’s got some pop,’” Stadem said. “She’s not a traditional long jumper. She’s longer. Her power maybe doesn’t show up. If you look at some long jumpers, they’re put together, she’s not. She’s just a longer kid, but she’s got a lot of quick-twitch fiber, and that comes out.”

Her sprinting and jumping prowess showed last spring. After placing in the top three at state in the 400-meter race as a freshman and sophomore, she won the long jump last spring with a mark of 18 feet, 3 inches. Add top-three finishes in the 100, 200 and 400 and she led the Bears to the state team title.

Her performance helped Grace draw offers from most of the Division I colleges in the Midwest, including Minnesota. Gophers’ track and field head coach Matt Bingle thought of her more as a sprinter. But in November she committed to Wake Forest, seeking a smaller school in a warmer climate that would allow her to jump.

“Wake Forest, the majority of the time, was like, ‘You’re going to long jump and you’re going to do the 4-by-4. Eventually we’re going to turn you into a multi (event),’ ” said Grace, who plans to major in health and exercise Science to become a physical therapist. “Wake Forest, as a school, I was just more attracted to from going to Blake, which is very small, and going to another smaller version.”

Wake Forest, like Keefer’s school, is in the Atlantic Coast Conference (ACC), meaning Keefer and Grace will have chances to compete against each other. In addition, Minnetonka’s Mia Barron, who had the state long jump record before Keefer, is a redshirt senior at the University of Virginia, also in the ACC conference.

Grace hasn’t jumped another 20 footer since that first indoor mark of the season. She reached 19 feet, 10¼ inches at the outdoor Hamline Elite Meet on April 26, to beat the meet record formally set by Keefer. Almost all of her outdoor jumps have been in the 19 feet range this year after she only had one all of last season.

Stadem said the marks she’s been setting are just what he’s looking for going into the last leg of the season.

“It’s cold, and the training really hasn’t kicked in yet. We haven’t hit any taper or anything like that. To be mid- to upper-19s, we’re thrilled,” Stadem said. “We build to be good conference, section and state, and that’s where we’ll see the numbers.”

In the process Grace has taken teammate Anisa Thompson as a long jump protégé. Thompson’s personal best this season of 17 feet, 3 inches would have placed the freshman fourth at the state meet last year. It’s a better mark than Grace’s when she was a freshman.

Thompson said Grace has been a role model for her and the team in general.

“When she jumps, and she jumps really far, it’s always like, ‘Oh, I want to try to do that too,’” Thompson said. “She really pulls us along.”

Grace hasn’t been focusing as heavily on her sprints this season because of her long jump goal, and she hasn’t hit a personal record in a sprint yet this season.

Her last day of high school was Thursday, giving her lots of time to focus on the other events, and the ultimate goal of a long jump state record.

“It’s just amazing to see when you really put in that hard work, how it really pays off,” said Grace’s mother, Jody. “She trained all winter. So to see her actually get better and improve from all that training, it just makes it all worth it.”

Jack Warrick is a University of Minnesota student on assignment for the Star Tribune.

Grace at a glance

Robbie Grace's best marks this season:
Long jump (indoor): 20 feet, 1 inch (personal best)
Long jump (outdoor): 19 feet, 10¼ inches (personal best)
400 meters: 58.82 seconds
200 meters: 25.94 seconds
100-meter dash: 12.50 seconds
4 x 200-meter relay: (with Sara Gregor, KK Haug and Anisa Thompson) 1:46.81
Committed to: Wake Forest
Major plans: health and exercise science
All in the family: Robbie’s father and brother are both named Robert. Her dad runs Be Graceful Bakery and Catering, a sandwich shop with concessions in local arenas. He said he didn’t get to see her 20-foot jump because he was working at his shop at U.S. Bank Stadium during the Final Four.
Coach-speak: “No one really likes a track workout, but she puts in the effort. She knows she’s good so she has to put in that effort, and she brings girls with her.” —Blake jump coach Scott Stadem
Grace on Grace: “The workouts get really hard and sometimes you’re not getting those marks that you wanted and so it’s easy to get frustrated, but you got to know when to be happy and have fun with it.”