'The buzz is real' for Hopkins' record-setting relay teams

Six Royals speedsters head into the state track and field meet with Minnesota’s fastest high school times in the 400- and 800-meter relays. 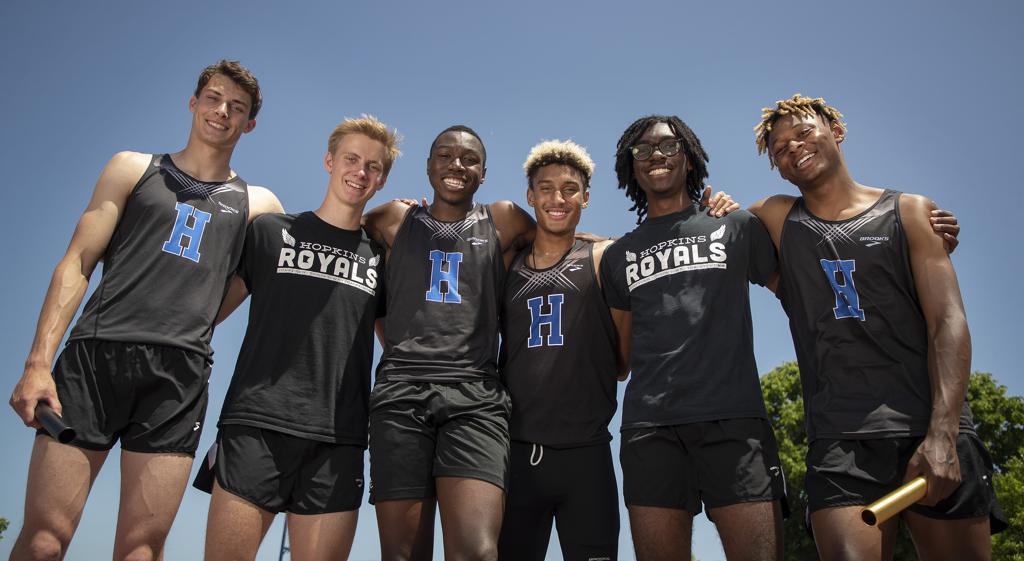 Streaking around the track and smashing Minnesota records brought celebrity status to the Hopkins boys’ 400- and 800-meter relay teams.

“The buzz is real,” Royals coach Nick Lovas said. “And these guys have earned that spotlight. They’ve worked for it and they welcome it.”

The 4x100 crew brings a record time of 41.23 seconds, set earlier this spring, into the Class 2A state track and field meet beginning Friday at Hamline University. And the Royals’ record 4x200 time of 1:26.37 set last year at state is in danger. Earlier this season this year’s quartet was just 42-hundreths of a second off the mark.

Six athletes form the two teams: Seniors Jaylen Champion, Joe Fahnbulleh, Sam Leervig and Wyatt Lubarski, junior Ty Bennett and sophomore George Jackson. Each runner’s personality and abilities make him a perfect fit. And together, they are something special.

Leadoff: Twitchy and the champ

Bennett starts the show in the 4x100 and Champion does likewise in the 4x200. Fahnbulleh calls Bennett a potent blend of “twitchy and explosive.” Jackson joked of Bennett, “He’s always in his own universe. But when it’s time to go, he doesn’t hesitate. And you don’t want someone coming off the blocks who is second-guessing themselves.”

Champion slides to the No. 2 spot in the 4x100. “His form and his times are consistent and when we need him the most, he can drop time,” Fahnbulleh said. The 4x100 with Champion set a school record in the first meet and remained intact all season.

Lubarski didn’t join the 4x200 until sections. Doing so fulfilled a goal that began last season as he watched the relay run to glory at state. “He’s a dog,” Leervig said. “It’s insane watching him lift. He can squat like there’s no tomorrow.” Lubarski, the only new 4x200 member, fits in well “because he’s such an intelligent athlete,” Lovas said. “He can make changes from one rep to the next.”

Jackson, the first sophomore captain on a Lovas-coached team, is perfect for the 4x100, a race where numbers right of the decimal often decide victory. “He’s young but he’s built for tough situations,” Fahnbulleh said. The youngster impresses Champion, who passes the baton to Jackson, with his explosiveness. The two work hard but know how to laugh. “Jaylen is ‘Baby shoulders’ and I’m ‘Shoulder pads’ because I have broad shoulders,” Jackson said.

Leervig is known as ‘White Lightning,’ bestowed for his pigmentation and blazing 4x200 splits. “That’s my dude,” said Fahnbulleh, who has taken the baton from Leervig for three seasons.

Fahnbulleh, who committed to run at the University of Florida, is no one-man show. “He’s constantly pushes us to be great,” Champion said. A dropped baton during the first 4x200 exchange at the Hamline Elite Meet meant Fahnbulleh would chase the pack in the final leg. Hopkins finished fifth.

“They all run as hard as they can for one another,” Lovas said.

State meet at a glance

When, where: Friday and Saturday at Hamline University in St. Paul.
Start times: 9 a.m. for Class 2A, about 3:30 p.m. for 1A.
Championship events: Friday — girls’ long jump, high jump, discus; boys’ triple jump, pole vault, shot put; girls’ and boys’ 3,200 meters. Saturday — all other events. For a full event list, go to mshsl.org.
Parking: Free at the state fairgrounds. Shuttle buses will run every 10 minutes.
Tickets: $12 adults, $8 students.
Free livestream: Both days of the meet will be streamed live at prepspotlight.tv.
Athletes to watch: Blake senior Robbie Grace returns to compete in four Class 1A events (100-, 200-, 400-meters and long jump). She holds the top seed in the 400 and long jump.

Not to be outdone by their record-setting male counterparts, the Hopkins’ girls put three relays in the Class 2A meet. The Royals’ 4x100, 4x200 and 4x400 are in the title mix.

In Class 2A, Rosemount’s Maxwell Otterdahl and Mounds View’s Josh Sampson have a chance at event sweeps. Otterdahl is the top seed in the shot put and discus throw. Sampson leads the way in the 110 hurdles and ranks second in the 300 hurdles.