North St. Paul senior Shaliciah Jones hoped to sweep the 100-, 200- and 400-meter races at the state track and field meet but everything is on hold. 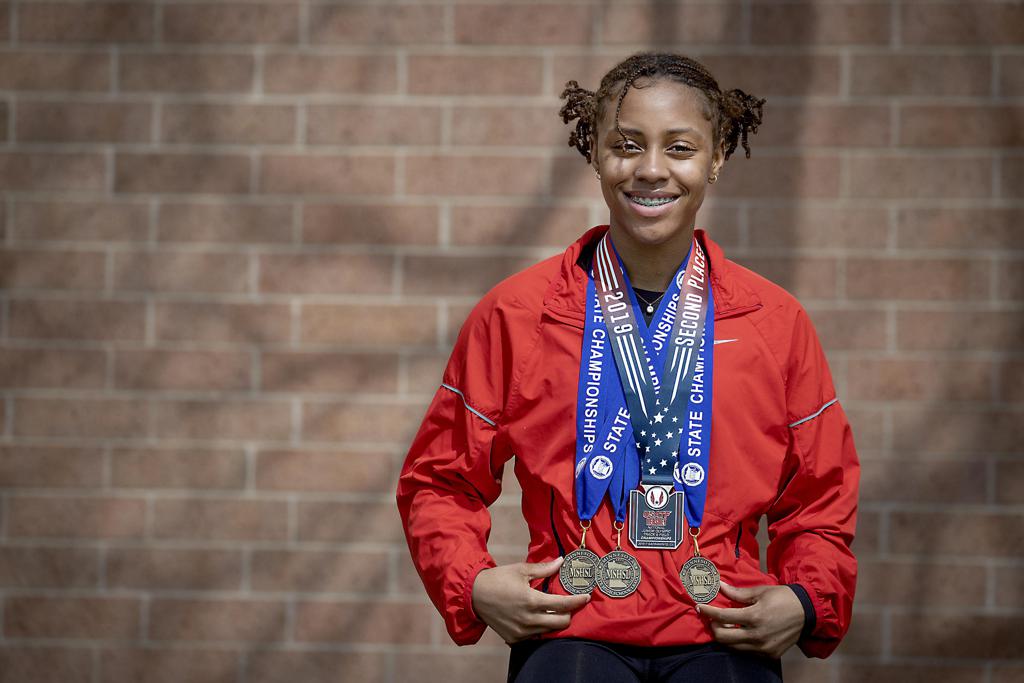 As a ninth-grader, North St. Paul sprinter Shaliciah Jones set goals to be a state champion and one of the best track and field athletes the state has ever seen.

Seven state titles and a state record in three seasons were a great start. Now a senior, Jones is sidelined by the COVID-19 pandemic and resulting school closures. Like Minnesota’s spring sports season, Jones’s ambitious new goals are in jeopardy. She wants to capture the rare trifecta of sweeping the 100-, 200- and 400-meter dash events in the Class 2A state meet.

And that’s why Jones, considered before the season among the Ms. Track and Field Award favorites, is not ready to bask in her considerable yet incomplete legacy.

“I set goals for myself every year and those haven’t been fulfilled yet, so I’m not satisfied yet,” Jones said.

He holds Jones in the same class as Akeem Sirleaf, a 2015 North St. Paul graduate who won the 200 at the state meet three consecutive times. Sirleaf was set to compete for Liberia in the 2020 Summer Olympics in Tokyo until the Games were postponed.

Sirleaf ran his final two college seasons at North Carolina A&T, which gave Wallert an opportunity to suggest Jones to the coaching staff. She visited Kansas, Minnesota and Wisconsin before finding the right fit in Greensboro, N.C.

“I was really comfortable with the athletes,” Jones said. “I really liked the programs and the coaches. It felt a lot like what I’m doing here at home. And they have a good biology program. I’m majoring in biology and I want to become a forensic scientist.”

Analysis of Jones’ state meet performances leads to the conclusion that she was on track toward elite status.

A nagging hamstring injury hijacked the first half of her junior season last spring. But Jones finished with a flourish. She raced to first in the 100 and 200 and anchored the Polars’ third consecutive 4x100 winning relay.

Jones chose the 400 over the 4x100 relay this spring because, “I felt like since it was my last year, I wanted to showcase everything that I could do.”

She runs three days per week through her neighborhood on St. Paul’s East Side for 20 to 25 minutes to build endurance. And she also does interval training for each of her three events.

Jones, one of four team captains, is using her platform to encourage teammates.

“You have to just realize that everyone is going through the same thing, so if I was to stop and break down than others would more than likely stop and break down,” Jones said. “A lot of people look up to me, so I just have to change my mind-set about a lot of things.”

Text messages and phone calls keep Jones connected to friends and teammates from North St. Paul to North Carolina. More challenging, she said, is that “it takes a different type of mental toughness to actually get up and want to train on your own, not knowing whether or not there will actually be a season.”

When facing doubt, Jones turns to her grandfather, AZ Jones Jr., the pastor at Piercing Faith Church in St. Paul.

“He will talk me through situations and give me scripture to read to get me through things,” she said. “I’ve been reading Psalm 91 a lot recently because it kind of relates to a lot of what is going on right now and it’s really kept me at peace.”

Jones, her school’s Athena Award winner for academic and athletic excellence, only competes in track and field. Should the spring season resume, she will be ready.

“I talked to my trainer about it and he said to be optimistic but to prepare myself for either way it goes,” Jones said. “But when you’ve been training so long for a season that is so short, it kind of hurts.”