Class 1A wheelchair winner challenged himself in 800

Lewiston-Altura’s Peyton Gunnarson won four wheelchair events in all, while records were set in numerous events of the boys' and girls' state meets. 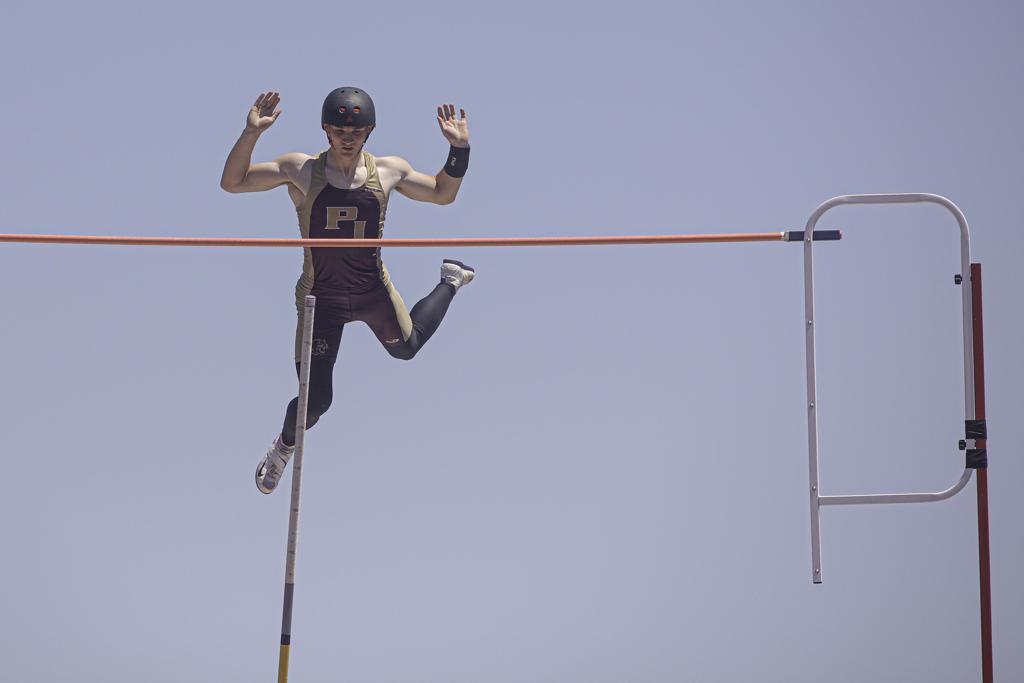 Jarod White of Pine Island set a state meet record (both classes) in the pole vault, clearing 15-9 Friday in the Class 1A state meet at St. Michael-Albertville. Photo by Mark Hvidsten, Sports Engine

Peyton Gunnarson only had himself to beat.

The Lewiston-Altura senior rolled around the St. Michael-Albertville High School track alone as the only competitor in the Class 1A boys’ wheelchair 800-meter race.

That made it harder to find motivation. So he dedicated each 100 meters of the race to a different person in his life. The first 100 meters were for his parents. On the last corner, he thought of his teammates. His final stretch was for himself.

“It doesn’t matter how many supporters you have,” he said. “You’re the person that’s putting in the work every day and working to be the best you can be.”

When he finished Friday, Gunnarson had bested his own Class 1A record he set three years ago by more than 10 seconds, finishing in 2:01:58.
Gunnarson and/or his younger brother, Tyler, competed in six of the seven 1A wheelchair events. Completing the school’s state meet qualifiers was their sister, Jonna, entered in the girls’ pole vault.

Peyton, who has a scholarship to race at the University of Arizona in the fall, won all four of his events: the 100, 200 and 800 and the shot put. Tyler placed second in the 3,200 on Thursday. He also finished second in the discus and 200 on Friday, and third in the 100.

“He’s sure going to miss me pushing him in practice every day,” Peyton said of Tyler. “But he’s in eighth grade and he’s already breaking records from when I was in 10th grade.”

Field event records
Pine Island junior Jarod White set a 1A state meet record in the pole vault when he cleared 15 feet, 9 inches on his first attempt. The previous record of 15-6 had stood since 2013.

“I set the school record multiple times this year by inches at a time,’’ White said, “and then eventually started jumping really high and PR-ing by ... quite a lot more than just inches.”

Ekiyor repeats in hurdles
Jayson Ekiyor of Providence Academy won the 110 hurdles in 14.51 seconds, besting his time when he won in 2019 by nearly half a second. Ekiyor was the runner-up in the 300 hurdles, finishing behind Kenny Soderberg of Morris Area/Chokio-Alberta (39.14).

Close contests
In the boys’ 4x100 relay, Minnehaha Academy bested Mora by two-hundredths of a second, finishing in 43.51.

In the boys’ 1,600 wheelchair race, the only wheelchair event that did not have a Gunnarson competing, United North Central’s Tyler Shepersky (4:26.16) finished ahead of Mankato Loyola/Cleveland’s Aidan Gravelle (4:27.19).

Two-hundredths of a second separated first and second place in the girls’ 100. Anisa Thompson of Blake edged out Rockford’s Cassia Cady with a time of 12.23. The same margin separated 400-dash champion Ellie Kuechle of Eden Valley-Watkins/Kimball (57.34) from runner-up Maia Peterson of Stewartville (57.36).