A roundup of top performances in events at both meets held at St. Michael-Albertville. 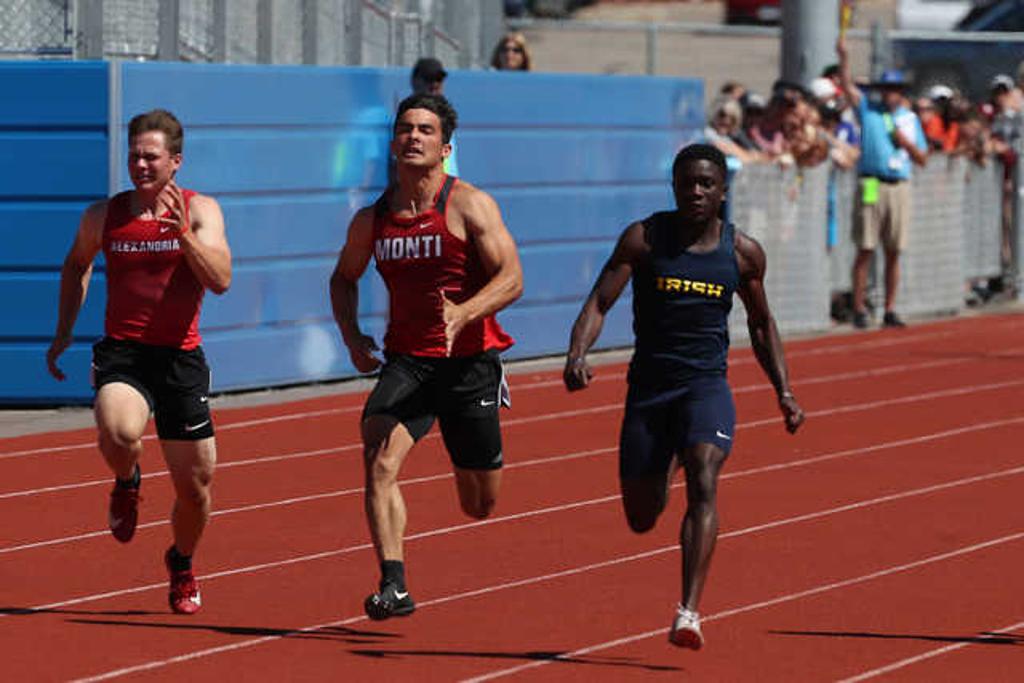 Gary Afram, right, of Rosemount, won the 100-meter race on Saturday in the Class 2A track and field state meet at St. Michael-Albertville High School. His time was 10.70 seconds. Photo: ANTRANIK TAVITIAN • anto.tavitian@startribune.com

It was a good day to be a Hatleli. Husband and wife Jay and Sara Hatleli coach the Rosemount boys’ and girls’ track teams, respectively. Both teams captured state titles at the Class 2A track and field state meet at St. Michael-Albertville High School.

The team got of to a good start when Gary Afram won the 100-meter dash. He also anchored the winning 4x200 relay, which had its best time of the season (1 minute, 29.65 seconds). Senior Brennen Peterson finished sixth in the 1,600.

But when the 4x100 relay dropped the baton, the Irish felt deflated. At least until the 400, when junior Miles Townsend, who was seeded ninth, finished fourth.

“All of the sudden, it was like we were back in it again,” Jay Hatleli said.

The boys took the team title with 55 points.

In the girls’ meet, Rosemount’s standout junior Ava Cinnamo won the 100 and 300 hurdles and placed seventh in the triple jump.“Every year she’s continued to improve,” Sara Hatleli said of Cinnamo. “She had some great goals set for herself, and they came through.”

Sophomore Jordan Hecht placed first for the Irish in discus (134-11) and second in shot put (40-11). Junior Ava Webster placed third in shot put with a throw of 38-6¾, more than one and a half feet farther than her seed mark.

“On paper, we knew we had a good chance,” Sara Hatleli said. “But paper doesn’t compete for you.”

Boys’ highlights
Duluth-Denfeld’s Blake Eaton won the 100 wheelchair race despite losing his left tire about halfway through. He scratched in the 800 race, but returned with a fresh wheel to win the 200.

Landen Liu of Centennial won a close 200 in 22.13 seconds. Monticello’s Sam Valor was second (22.20), followed by a tie for third between Grady O’Neil of St. Thomas Academy and Julian Tong of St. Paul Central. Both finished in 22.25.

Relay teams from Farmington won both the 4x200 and 4x400. In the latter, anchor Ramy Ayoub ran the final lap in 47.75 seconds to overtake Mounds View on the home stretch.

The 1,600 was among the closest of the day. Elliott McArthur from Mounds View led for much of the way. On the final lap, Prior Lake senior Gabe Smit moved to overtake him. As they neared the finish line with Smit in front, McArthur stumbled and fell, resulting in his disqualification for interference.

Smit won in 4:12.44, almost two seconds ahead of runner-up Benjamin Scheller of Chanhassen. Smit also won the 3,200 on Thursday.

Girls’ highlights
The girls’ 100 ended with a photo finish. Maddie Dahlien of Edina and Alexis Pratt of Stillwater both were clocked in 11.99 seconds. A closer look showed Dahlien won by three-thousandths of a second. She later won the 200 in 24.45.

St. Michael-Albertville junior Alexandra Weimer, who placed second in Thursday’s 3,200, won the 1,600 in a personal-best 4:49.93. Sophomore Olivia Peal won in the long jump (18-1¾). Peal ran the second leg of the 4x100 relay, which the Knights won thanks to a late burst by anchor Aaliyah Heine.

Weaver won the 3,200 Thursday and placed third Saturday in the 1,600. Hansen won the shot put and discus Saturday with personal bests.