Shaina Zinter on Friday added a personal best in the 200 to two Class 1A hurdles victories. 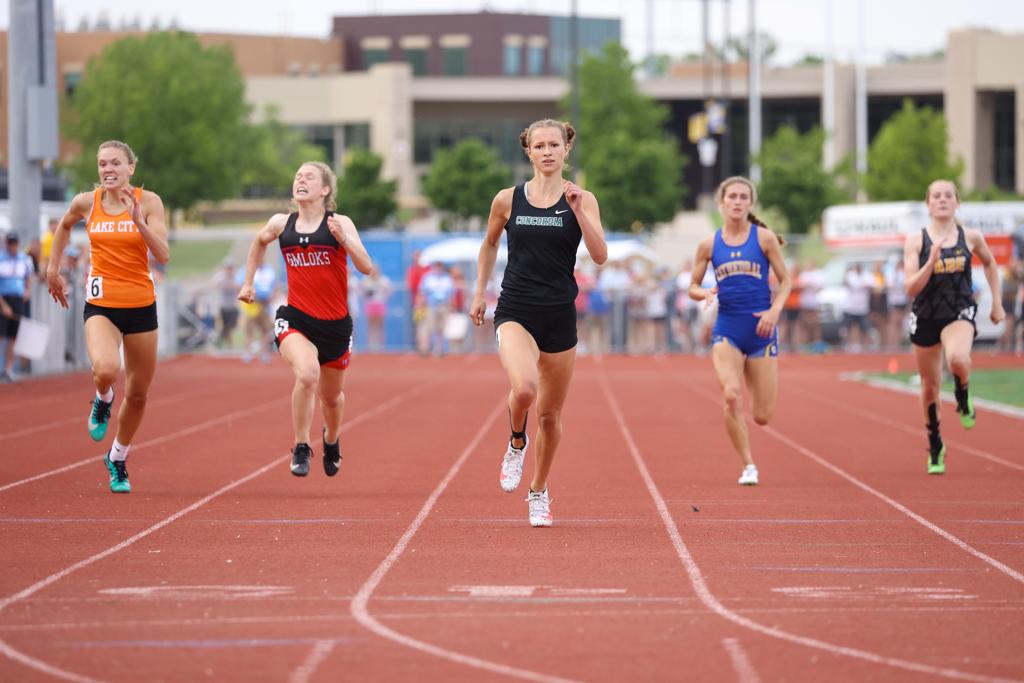 Concordia Academy's Shaina Zinter won the 200 meter dash in the Class 1A state track and field meet with a personal-best time of 24.98 seconds on Friday [Photo by Cheryl A. Myers, SportsEngine]

After crossing the finish line in the final race of her decorated high school career, Concordia Academy of Roseville senior Shaina Zinter looked left toward the scoreboard and placed her hands on each side of her head.

Her time of 24.98 seconds not only won the 200-meter race, but stood as a personal best. Having already defended her Class 1A state titles in the 100 and 300 hurdles earlier in the meet, Zinter finished her busy Friday at St. Michael-Albertville with a flourish.

“I was coming here thinking, ‘I have it in me to break 25. I just have to have my eyes on the finish line and not the clock,’” Zinter said. “It was the last event and I was the most tired, but I thought I could pull through with a good time.”

Zinter’s 3-for-3 day on the track started with a redemption bid. On Thursday, she placed second in long jump to Brielle Kuechle of Eden Valley-Watkins/Kimball.

“It’s definitely a quality to look up to,” Kuechle said.

But while gracious in the moment, Zinter used the setback as fuel for Friday. Her first event, the 100 hurdles, meant facing Kuechle again. Zinter won. Kuechle took third.

“I really wanted to beat her because she beat me in the long jump,” Zinter said. “So I made sure of that.”

Beacons coach Marc Paul said of Zinter, “She’s a hungry kid. She has a passion to go out and excel.”

Zinter posted 46 of the Beacons’ 68 points, helping her team to second place. She will compete in the heptathlon next season at Wisconsin.

“This was my last high school meet for my school,” Zinter said. “So it was time to go out as strong as I can.”

A state championship served as the ultimate payoff.

The Polars’ foursome of Zelaun Black, Clay, Baker and Jaivon Hill won with a 42.57 finish.

“It was a close race between who was first and second,” Hill said. “But I think the other team messed up their handoff and I just took it from there.”

More than a relay anchor, Hill serves as a team captain. He sensed something special in the 4x100 crew and wasn’t afraid to raise the stakes.

“I told them ‘We’ve got a chance to be state champs, so let’s go out and do it and show everybody what we’re about,’” Hill said.

Other Class 1A state champions

Nova Classical Academy, located in St. Paul, earned the boys’ team title with 47.5 points, just a half-point ahead of Perham.

Max Reis of Spectrum ran the fastest prelim times in the boys’ 100 and 400 dashes.