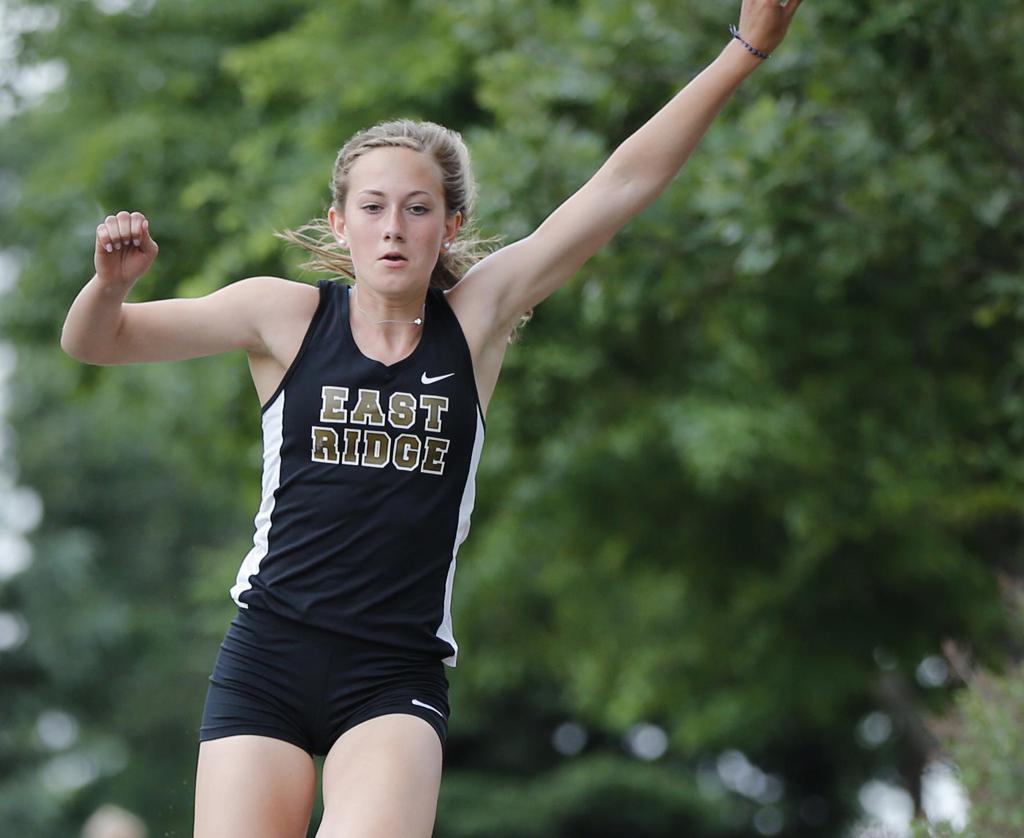 Preparations for her signature event, the triple jump, were interrupted Saturday morning at the state meet at Hamline University. A meet official informed Weiss she had won the inaugural Ms. Track and Field award presented by the sport’s coaches association.

The news brought joyful tears. Then Weiss, who has worn the same socks for the past five years at every meet, composed herself and resumed domination of the triple jump. She capped a stellar prep career with a final mark of 39 feet, 7 ¾ inches for a third consecutive Class 2A state title.

“It doesn’t feel real,” said the Stanford-bound Weiss, who set the state record of 41-2 ¼ earlier this season. “My last meet as a high schooler — it’s a good way to go out.”

Hopkins fancies itself as “Track Town MN,” which means junior Joe Fahnbulleh should receive keys to the city.

Fahnbulleh blazed to a pair of first-place finishes Saturday, first as the anchor leg of the Royals’ record-setting 4x200-meter relay. The crew of Jaylen Champion, King Allah, Sam Leervig and Fahnbulleh set a state record time of 1 minute, 26.37 seconds.

“It means the world to us,” Fahnbulleh said.

“We were the best in state ever, so it gave me confidence and boosted my speed tenfold,” Fahnbulleh said.

The break extended her recovery time between the 1,600 and 800 distance events and helped her capture two state championships.

Expecting to run with group of favorites in both races, Kompelien gutted out two victories with about one second to spare.

“I always know that I can count on my kick to get me out of an iffy situation,” Kompelien said.

As St. Michael-Albertville junior Ethan Peal celebrated his 100 victory, he looked toward the crowd, curled his thumb and forefinger and held the sign for “OK” to his eye for his father.

The message, used to celebrate three-pointers, owes to their enjoyment of basketball, Peal said. Later, Peal waved his index finger aloft as he corralled fellow 4x100 relay teammates to recognize their state title.

A surprise start in the 100 set the tone for a memorable day.

“The start felt really good, and my starts are usually the bad part,” she said. “So it’s was like, ‘OK, keep going with it.’ ”

Wayzata senior Khalid Hussein won the 1,600 in 4:13.30 and secured his spot as the state’s dominant distance runner. He added a cross-country title last fall and the 3,200 crown on Friday. He helped the Trojans win the team title with 75 points. Minnetonka earned the girls’ title with 63 points, thanks in large part to victories in the 4x200, 4x400 and 4x800 relays.

A pre-race disqualification from the 200 on Friday meant Saturday’s 400 was St. Paul Johnson senior Keylan Jackson’s last good shot at a state title.

“It kind of lit a fire,” Jackson said of the DQ, which he received for being late to check-in because he wasn’t feeling well. “I was really upset because the 400 and 200 are my main races.”

Three Mustangs left Hamline University with state championships. Josh Sampson won the 110 hurdles in 14.60, leaning hard at the finish line to edge Waconia senior Caden Turner by five-hundredths of a second and then crashing to the track.

Joel Smith defended his 300 title in 38.05, giving the Mustangs a hurdles sweep.

On the girls’ side, junior Julia Fixsen captured the pole vault title and reset her own state record in the process. She cleared the bar at 13-9 ¼.